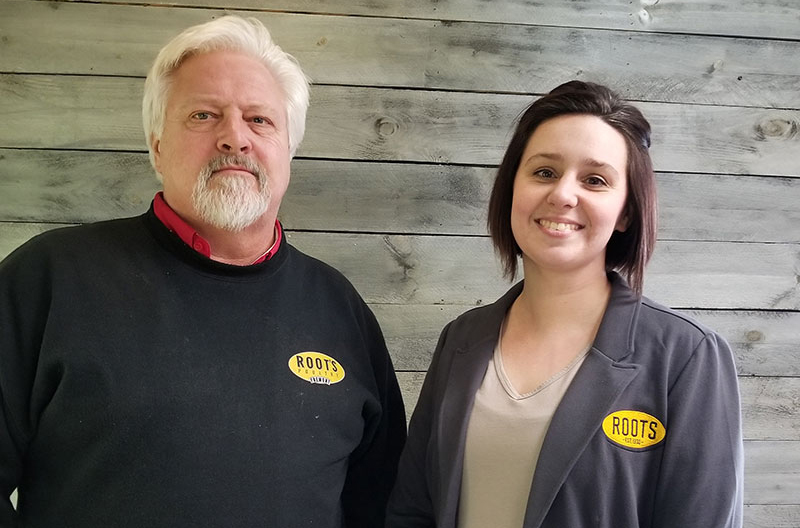 Originally posted on The Shelby Report.

Wayne Root was stringing phone lines for AT&T in northwest Ohio when the Great Depression hit, taking his job with it. To support his family, Root began buying produce and other foods from local farmers and taking them to market in the Cleveland area, where he had contacts. In Cleveland, he would purchase products to bring back and sell to the farmers.

“That was the beginning of the business,” Mark Damschroder, Root’s grandson, told The Shelby Report. “At some point, he started raising his own chickens to butcher and take to the market. That evolved into a chicken processing facility.”

In the early days, Roots Poultry was located in a rented facility in Fremont not far from the current location.

In 1940, his grandparents purchased a farm. One of the first buildings to go up on the property had two rooms. Chickens were slaughtered in the back and the fresh poultry was sold in the front.

The facility where Roots Poultry is located today was built in 1955 and opened in early 1956. It still had an area in the back where chickens were brought in, a processing area in the middle and, in the front, a retail store.

The second generation came along and also worked in the business. Damschroder’s mother, Elizabeth, had five brothers and a sister. The family raised and dressed their own chickens. They also were developing a wholesale business.

But the Wholesome Meat Act of 1967 changed all that. It gave the U.S. Department of Agriculture the power to regulate every step in the processing of fresh meat. Mark’s grandfather would have had to build an entirely new facility for the slaughter operations.

“He decided at his age and for the investment that he had made in the existing building, he wasn’t going to do that, so he quit raising and dressing his own chickens and we became a further processor,” Damschroder said.

The children moved on to other things. As a result, the family business skipped a generation.

“When I was in high school, as a grandchild there was opportunity to work the business in the summer and after school and, from a timing standpoint, when I came out of school in the ’70s, my grandfather’s health was starting to fail and there was really nobody behind me and nobody in front of me interested in the business,” Damschroder said.

Mark and his brother Mike stayed with the business and, in 1985, bought it from their grandmother. Mark bought his brother’s portion of the business about five years ago (for succession planning purposes), and Mike remains active in the company.

Damschroder said he and his brother were lucky to ride a wave of increased poultry consumption in the 1980s. They were young, energetic and “things really took off for us,” he said. “We’ve been able to grow the business and have added on multiple times.”

Shredded chicken is No. 1, but there’s more

The company by that time had evolved to the point that it was producing ready-to-eat chicken products. Shredded chicken became the company’s bread-and-butter product, Damschroder said.

J.H. Routh Packing out of Sandusky approached the company a few years ago and asked whether Roots Poultry would produce a barbecue pork product in retail packs. The company got a red meat license and began processing pork products to be sold under the Daisyfield brand.

Today, the company also makes its own beef products in addition to producing smoked pulled pork.

“Though we’ve since expanded into beef and pork and we make all the shredded and barbecue sandwich meats, shredded chicken for hot chicken sandwiches is still far and away our No. 1 product,” Damschroder said.

The company produces two dozen products, and all can be found in the freezer section at retail stores where 16-oz. and 32-oz. containers are popular. The company also sells 96-oz. tubs meant for parties or tailgating that are offered by larger retail stores. In addition, Roots Poultry has 20-lb. institutional packaging for foodservice distributors.

‘We’re primarily strongest in northwest Ohio, and then it’s available in different areas throughout Ohio and other states close to the border, but we’re always trying to push the territory out there a little farther—and we do a little more with Lipari every year,” Damschroder said.

To help facilitate an increase, the company will take part in the Lipari Foods show in April, hoping to get in front of folks not already familiar with Roots Poultry. It no doubt will be showcasing the most recent addition to Roots Poultry offerings: Buffalo Chicken Dip. With Roots Poultry’s shredded chicken as a base, the dip features the buffalo flavor that wing lovers appreciate. The company first produced and sold it only at the family’s retail store.

“It was such a huge hit that we decided to bring it onto our product line,” said Annette Reed, Damschroder’s daughter. “We had some of our local distributors really interested in bringing it on, so it’s part of our product line now.”

Reed is very involved in the family business and, in a way, is the face of the company. She has been featured on local television stations talking about the products and also in videos on the Roots Poultry Facebook page that offer behind-the-scenes glimpses at the company and its products.

She has two brothers, Matt and Steven. Hopes are that she and Matt, a firefighter for the City of Fremont, will continue with the business. (Steven works for a mechanical contractor and absolutely loves it, his dad said.) The succession plan is not carved in stone but a work in progress, according to Damschroder. For his part, he is stepping back a bit.

“I’m at the stage of my career where, in addition to still trying to grow the business, I’m trying to plan my exit strategy and get the next generation involved,” he said. “I don’t want to try to push too much of my vision out until we have a plan in place. I’ll just kind of hold back and see what direction the next generation wants to take.”

Reed is an entrepreneur in her own right. She and her husband, Shawn, own Welly’s, a company that makes horseradish and other sauces.

How the family came to own Welly’s says a lot about the people behind Roots Poultry. The Damschroders bought Welly’s in 2007. They weren’t looking to add a business, but this one had served Fremont since the 1940s and was in danger of disappearing when the owner began having health issues.

“It was a well-thought-of company—similar to Roots Poultry—and a lot of the customers selling the Roots Poultry product were also selling the Welly’s products,” Damschroder said. “I just didn’t want to see the business fold, because once the doors were closed, that was it. In northwest Ohio, Welly’s brand horseradish is the brand to get, so it was more wanting to save the company from extinction.”

With Damschroder’s offer to acquire it accepted, Roots Poultry was now in the horseradish business. Reed bought the company from her parents in 2017.

“It worked out well for both my wife and me for 10 years and for our daughter now,” Damschroder said.

The retail store and beyond

Welly’s products can be found alongside Roots Poultry products in the company’s retail store, which also features other local products and unique finds. Reed describes it as a mini grocery store unlike any other.

“We have a whole deli case where we’ve got six or eight different deli meats and about 24 different cheeses that we slice to order,” she said. “We also have a pretty good-sized freezer section. We have a lot of Amish products, like Walnut Creek items. Our retail store has a wide selection. We try to hit a lot of the niche items that you can’t find just anywhere. We like to carry a lot of locally produced items and keep things unique so that when a customer comes in here, it’s not just any other store that they’re going in.”

Locals will find products they are familiar with in the retail store, including as many as a dozen varieties of Carle’s Bratwurst, which is made in Bucyrus. In turn, Carle’s sells Roots Poultry products at its retail store.

The Roots Poultry store also offers Lake Erie Yellow Perch, which Damschroder refers to as “some of the best fish you’re ever going to eat around here.

“We have a freezer door dedicated to seafood,” he said. “Walleye to king crab legs—we do the shrimp and the seafood items people ask for during the holidays. We sell that year-round, and that’s done well for us.”

Roots Poultry also sells its own soup-to-go in chicken noodle and potato varieties. And, as with the Carle’s Bratwurst, it brings in a local company’s soup as well.

“We like to use (Medina-based) Sandridge brand soups,” Reed said. “They are very high quality.”

Roots Poultry products are available at independents grocers such as Churchill’s Market in the Toledo area and Community Markets and other banners operated by Findlay-based Fresh Encounter Inc. They also are sold in some Walmarts in northwest Ohio and Kroger stores.

Roots Poultry products may be enjoyed at Cedar Point as well. The 364-acre amusement park in Sandusky is known for its many roller coasters, with a current count of 17, including its newest, Steel Vengeance, which was installed last year, and Wicked Twister, the world’s tallest and fastest inverted coaster.

“Sandusky is only about 25 miles from here, so it’s a local favorite and they draw people from all over the Midwest,” Damschroder said. “So that’s been a very nice shot in the arm as far as our product being sold on the grounds over there.”