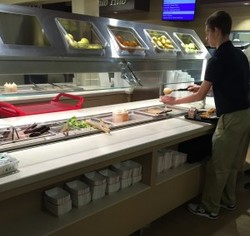 Story and photos by Amy Fovargue

We talked with Michaeleen Rogers, child nutrition supervisor who retired last month after 40 years of service in Fremont City Schools to learn about their farm to school work. Rogers was instrumental in bringing local foods to the district and her positive relationships even encouraged the local producers to sell to other schools. “For many years, USDA would not allow us to buy local foods, thankfully that changed,” she said. Other challenges she faced were: finding a product that fits the school’s needs or having them redesigned to fit the meal program. “It also takes a lot of time to develop relationships with suppliers and sometimes the language or standards are a barrier as my idea of a case and theirs are different,” she explained.

She credits the program’s success through support from their Healthy Schools Leadership Initiative (HSLI) committee. The HSLI committee consists of school administrators, school nurses, teachers, students and community members. The committee wanted to provide better food choices for the children. There is a districtwide commitment on healthful food. The district currently funds a fresh fruit or veggie snack during the afternoon which goes to every elementary child. Students at all of the Fremont schools are encouraged to take all of the fruit and vegetables that they can eat during their meal.

Fremont City Schools also benefited from a $29,000 Farm to School “planning grant” from the USDA in 2014. The grant was used to further the health and wellness efforts, including serving more local foods in the cafeteria, growing vegetables in gardens and vertical containers, and planting fruit trees. During that year, the district surveyed students in grades 5-12 and parents about school meal program participation and satisfaction. The survey results were used to make some menu changes and include more choices in the school meals.

The enrollment at Fremont from preschool through grade 12 is more than 4,000. They are feeding over 3,000 lunches a day, at nine schools in the district. More than 60% of the students are eligible for free and reduced lunch.

It was pizza day at the Lutz Elementary school in Fremont. They were initiating a fresh whole wheat crust that was provided by the local Papa Murphy’s pizza. It was being baked in the school’s oven by business owner Mike Wing. Typically his business does not cook the pizza as it is a take and bake business, but he was there to train the kitchen staff on how to bake it. Mike was proud to be serving at the school where his wife, children and grandchildren had attended. “These relationships with the local businesses have built support and trust for the district,” Rogers said.

How do the students react to the local food?
The kids were thrilled with their lunch of fresh made pizza instead of frozen. There was a long line of kids going back for seconds. Rogers said, “The pizza is a great thing here, it is of good quality and a lot of the students know the product. It was promoted by the building principal on the school’s television station throughout the week. We had the highest lunch count this year at 319 student meals, typically the count is 268. Meal counts do go up when the students know it is local food.”

Rogers likes to provide enticing meals at the schools. The Lutz elementary principal bragged about how the staff and students thoroughly enjoy the annual end of year picnic with locally produced hotdogs and burgers on the grill prepared by the kitchen staff. The students and staff were able to sit outside in front yard of the school and enjoy it.

At the high school Rogers had a new grill installed in September, so they could grill locally produced beef burgers. She recently purchased a machine to make smoothies from local fruit. They also received a license to serve fresh made pizzas daily.

A closing comment from Rogers, regarding having fresh fruits and veggies as snacks at school was, “10 years from now when these kids are grown, I want them to think of having fruit or veggies as a snack. They are developing their healthy habits here at school.”

Eshleman’s Fruit Farm in Clyde has a 200 acre fruit and vegetable farm, sells to Fremont schools
Eshleman’s typically sell primarily apples to the schools, but have sold peaches, pears and some veggies in the past. “After successfully selling to Fremont schools, we then reached out to the other schools (currently 10 districts). The schools want the sweeter varieties that they can eat fresh in medium to smaller sized which works best for the children. Golden delicious, Fuji, Gala, and Jonagold are the varieties the schools want,” Betty Eshleman said.
“The schools and retail market want locally grown apples, because they taste so much better. One school stopped buying from us for a year and one of the student’s complained that they did not taste as well, so we are back to selling to that school,” she explained.

“We provide a good, fresh and top quality product that is stored in climate controlled coolers so we can deliver year round.” It also provides Eshleman’s with a year round outlet for their apples. Throughout the school year they sell 50 bushels of apples a week.

“Selling to the schools is a small part of what we do, but we do it because we want the students to learn what good local fruit tastes like, and what it is about,” Eshleman concluded.

Roots Poultry started selling to the Fremont school system three years ago
According to Mark Damschroder of Roots Poultry, “This has been a nice addition to our business. I consider it a success because we are getting feedback from parents that appreciate the fact that their student is getting good food,” he said. They now sell shredded chicken, cubed chicken, ground chicken, shredded beef, chicken broth and beef broth. We have also tried new products that might be added to the lineup in the future.

“The biggest challenge we face is keeping prices reasonable in the face of increased costs, especially beef,” explained Damschroder. Roots employs 20 people, and has added 2 people this fall as a result of overall growth in business, including the school systems. “We also sell to Gibsonburg Schools and Clyde Schools,” he added.

Last school year Roots Poultry sold to Fremont schools about 500 gallons of broth (including beef and chicken) and about 5,000 pounds of chicken and beef combined. Clyde and Gibsonburg just started purchasing this school year, but have used a few hundred pounds of product each.

Damschroder said, “Michealeen was great to work with because she wasn’t afraid to try new ideas, we are still working on a ground chicken sloppy joe that the students will like. We worked together to test different cooking methods on some of the schools equipment, and we even tested an oven set up at our facility to cook some of our products, in addition to some other products the schools were using. She was a strong advocate of the farm to school program and we truly appreciated that.”